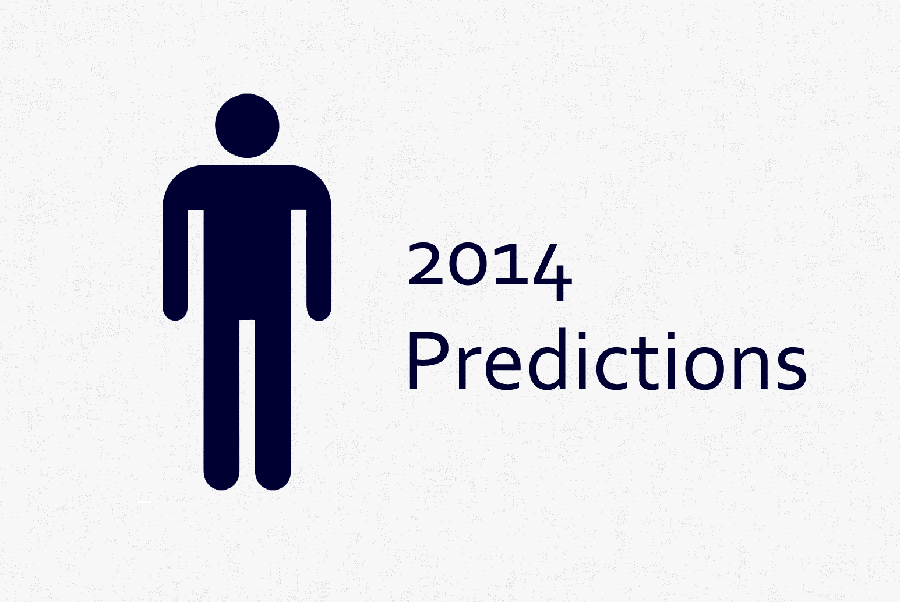 2013 proved that even with a slow-moving economic recovery, it’s still hard to find (and keep) good talent.

Finding the right people, at the right time, with the right skills is a never-ending battle. We’ve researched human resource predictions around the web and compiled our favorites. Not to miss out on the party, we threw out a few game-changing 2014 predictions of our own.

Employee engagement was a hot topic in 2013 and we think that’ll accelerate in 2014. Companies that have engaged employees outperform those who don’t by up to 202%. However, according to a 2012 Gallup survey, approximately 30% of the entire workforce is actively engaged.

What did we find? Salary isn’t the main driver of employee engagement: studies showed that direct relationships with managers and senior leadership as well as having pride in working for the company are some of the bigger factors that drive intrapreneurs, or internal entrepreneurs. Add to that, people who were afraid to move from job to job during the economic downturn might actually feel brave enough now…and that’s making HR managers shiver.

Where HR comes in: We think more companies in 2014 will put down the engagement survey and start thinking outside the box. “While more than 60 percent of companies have some form of annual engagement survey, we need to monitor engagement more regularly. By the time the engagement survey comes out, the proverbial ‘horse has already left the barn.’” They’ll realize they need to work with senior level managers to provide an environment where employees can thrive. This includes recognition, guidance and the potential for career growth within the company.

Speaking of thinking outside the box (or suggestion box), having an innovation program in place is one of the best ways for employers to track and facilitate engagement. We think you’ll see the return of innovation programs in 2014 en masse. More organizations will realize employees are their biggest asset because they know how the company operates and what does and doesn’t work.

Where HR comes in: In 2014, more companies will look into establishing innovation or ideation programs. Properly engaged employees will utilize this tool and help their companies solve small challenges and large ones. But just implementing an innovation program won’t be enough. They’ll need to ensure managers  are involved and provide proper feedback. A successful innovation program will give a whole new look on collaboration and will let employees across the company give input on ideas they think will thrive.

If you haven’t heard about the massive healthcare reform taking place, then you’ve been hiding under a rock.

With the rollout of the Affordable Care Act (ACA) in full force, many of us have seen a serious shift in how benefit packages are presented. Not to mention the 401(k) implementations are changing by the day as pressure mounts to boost worker savings and participation rates and to help retirees seamlessly convert savings into guaranteed lifetime income.

It’s anyone’s guess how this affects HR in 2014, as the changes are still being implemented. However, we can be assured it’ll be a key component of an HR manager’s role. We’ll most likely also see an increase in flexible benefits such as health savings accounts and high deductible catastrophic benefit plans.

Where HR comes in: You’re not alone; the majority of this makes any HR professionals head spin. In 2014, the time you spend on educating your workers about the role of company benefits in life planning, will increase signficantly. With this, you’ll have to educate yourself first, and be nimble in how you approach it. Hosting seminars, Q&A’s and even one-on-one guidance sessions (often through webinars and scheduled chats) will be key drivers in keeping a consistent and updated message.

Tools like LinkedIn, Twitter and Google+ make finding new jobs as easy as liking someone’s status, yet they also make it easy for you to lose your most important intellectual property. LinkedIn has already been a successful tool, but we think you’ll see more employers be creative in attracting key talent. Possibly a return to aggressive perks such as massages and sports cars, and more recruiting people from Facebook, Twitter and possibly Pinterest, Vine or YouTube. How? Your guess is as a good as our's.

There's also no denying LinkedIn's success, yet the success may lead to challenges in 2014. An increased focus on monetization and more people selling products may lead to a drop-off of qualified candidates, who want to avoid the spam. Will 2014 be the year that viable competition to LinkedIn makes waves?

Where HR comes in: Nothing new here, but as the economy recovers 2014 will force employers to double-down to keep their people.

After several high profile lawsuits against Conde Nast and NBCUniversal in 2013, the Department of Labor and the IRS clarified their treatment of unpaid internships. With this clarification, the reality is most unpaid internships are illegal. Becaues of this, you’ll see even fewer opportunities for soon-to-be or recent graduates to gain experience.

Not sure how this will play out in 2014, but it’ll most likely have a drastic impact on opportunities for recent and soon-to-be grads to get experience.

Where HR comes in: [Being soapbox] Some industries are affected more than others (finance, advertising, fashion, publishing), but this is a good thing. We don’t believe in slave labor and have never asked for someone to work for free. [End soapbox]

It’s Better (and Cheaper) to Train than Recruit.

Hiring is a tedious and expensive process. When a company hires an employee, they take a lot of time to advertise the role, narrow down candidates, and do thorough background and reference checks on the one that they choose. Once the new hire is approved, they go through orientation, on-boarding and they may go through other types of company training if necessary. But what happens if this employee makes a mistake?

Where HR comes in: Instead of jumping immediately to the discipline side of rehabilitation (such as warnings and even possible termination), you might see some companies move to better coaching methods, mentoring, and additional workshops. But in 2014, maybe we’ll see the trend of continually investing in talent rather than abandoning them for new hires.

Will we see the return of the Chief Learning Officer (CLO) that was all the rage in 2000? Let's hold off on that prediction for now :)

We’ve all sat through our fair share of ghastly onboarding and training sessions. You know, the kind where the fire marshall has to spray the fire extinguisher every 30 seconds to make sure you’re paying attention to fire safety (yes, this has happened.) There are many ways that we can improve these otherwise snoozeworthy activities. This time around maybe employees will actually learn something—from don’t put aluminum foil in the microwave to effectively establishing relationships with clients.

Where HR comes in: One concept we’ve seen more and more the gamification of learning. The concept here is taking what employees are supposed to learn in training and turning them into a mobile-like app with a point system. This makes training less tedious and the person with the highest score may get some sort of reward for being engaged in the program.

Where HR comes in: You’re going to spend a lot of time researching apps.

Get In or Get Out.

Yahoo’s high-flying CEO Marissa Mayer made waves in 2013 when she proclaimed “all hands on deck,” and removed work at home privileges from approximately 300 employees. While we think this was overblown in Yahoo’s case (logs showed most telecommuters hadn’t been actively engaged in their jobs, the change affected a small number of Yahoo’s 10,000 employees, and it’s been positively received within Yahoo’s walls), it started a trend and a conversation about which results in better performance: virtual teams or all hands on deck.

Where HR comes in: In 2014, you’ll see employers take sides in one camp or the other. Either they’ll move to an all in-house team (companies like Target and HP have followed Yahoo’s lead), we’ll see other companies (like Automattic) proclaim the benefits of virtual teams.

In either case, we think you’ll see employers look at their unique circumstances and find the setup that works for them.

Ring in the New Year.

2014 is going to be a formative year for HR and the tools available to them. As the old human resource traditions make way for new technologies, we think we’ll see HR’s role in business success be more important than ever. This is going to be the year of the employee with engagement and retention being a top priority. We are definitely going to see a rise in the use of technology for the HR department whether it is gamification, bring your own device to work, or interactive innovation programs.

HR will be the centers of expertise and top notch recruitment for today’s thriving companies.