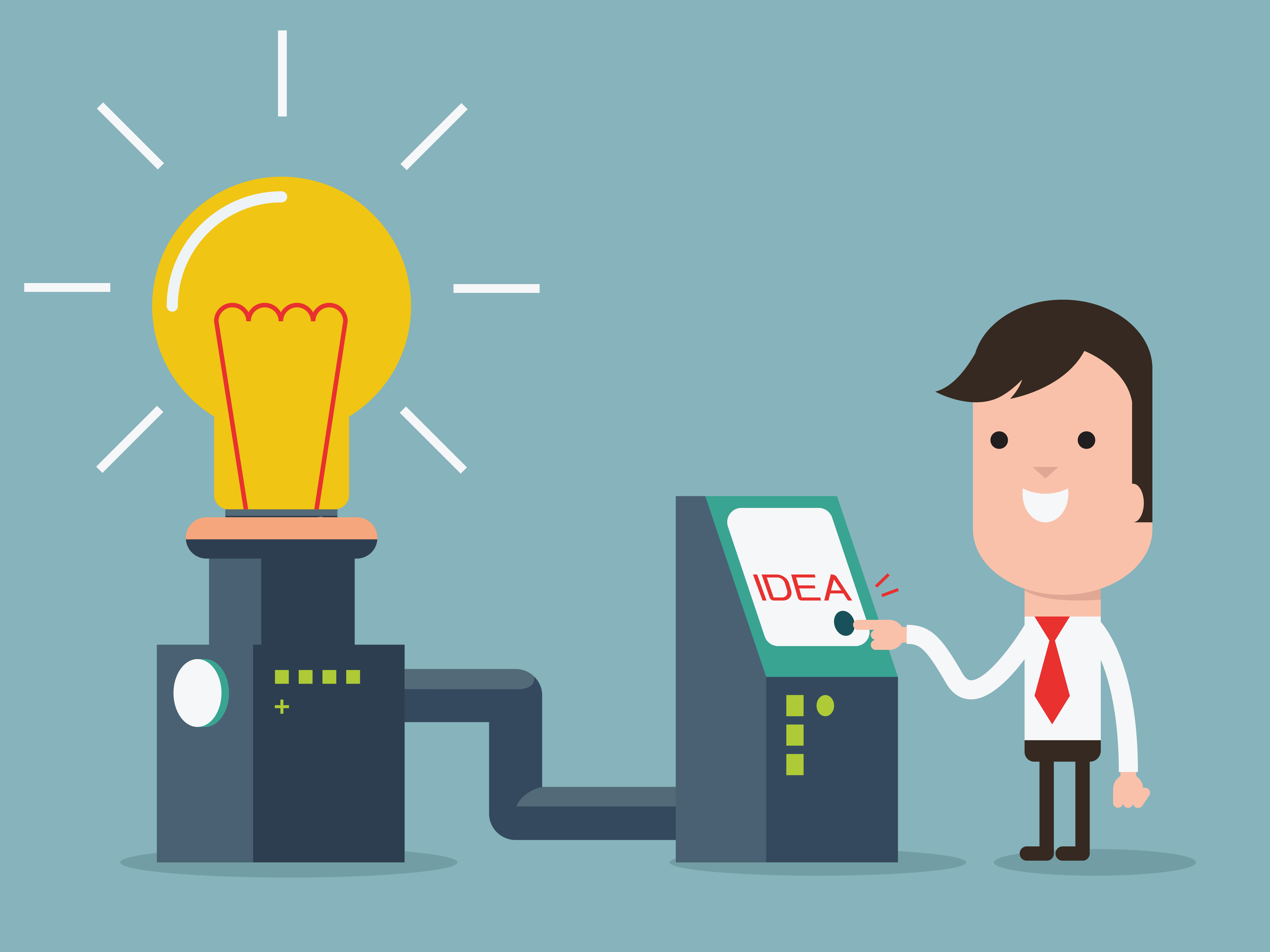 If you look on Twitter and in recent articles intrapreneurship may seem like a new concept or "buzzword," but it has actually been around for a while.

The original word “intrapreneur” was coined by Gifford Pinchot III in a 1978 paper written with his wife Elizabeth. It was later popularized by Steve Jobs in a 1985 Newsweek article. Jobs said, “The Macintosh team was what is commonly known as intrapreneurship… a group of people going, in essence, back to the garage, but in a large company.”

Some companies stifle innovation because there often isn’t room for people to explore outside of their job description. However, many of these employees have ideas that could be the next Macintosh or iPhone.

Here are some examples of organizations that allowed their employees ideas come to light and in turn they reaped great benefits.

Idea: It wouldn’t be a post about intrapreneurship without the famous “Skunk Works” project. Skunk Works is another name for Advanced Development Programs or ADP. Lockheed Martin basically allowed Kelly Johnson, Skunk Works founder, to work as an autonomous organization with a small, focused team.

Benefit: Skunk Works created some of the most innovative aircraft models, including the SR71. Moral of the story: if you have an intrapreneur like Johnson in your organization, don’t fight back. Instead, give them the support and resources they need to thrive. Lockheed Martin learned early that successful intrapreneurship happens whenteam members are allowed to define a clear path with their idea and they are given the power to modify and innovate as needed without a crazy approval process. Most big innovations need to be modified throughout their development.

Idea: A TI researcher, Larry Hornbeck, had been experimenting with technology using tiny mirrors to redirect photons for almost a decade. In 1987, Hornbeck and his team developed Digital Micromirror Device. DMD was used for printing airline tickets at first but soon after TI started an internal venture called Digital Imaging Venture Project to expand on the efforts.

Benefit: For a long time, video projectors weighed the equivalent to a small child and cost upwards of $15,000. Hornbeck realized this technology could greatly decrease the size and cost of the digital projector and it soon became an industry standard. He even received an Emmy award for Outstanding Achievement in Engineering Development, talk about some serious intrapreneurial bragging rights.

Idea: A guard suggested a change in the way Massachusetts Department of Correction stored their inmate photos. Instead of taking pictures with film and storing them the old fashioned way, why not use digital cameras and use a database for image storing.

Benefit: The department has sixteen correctional facilities and in the first year of implementation alone it saved $56,000 dollars on film and most likely a lot of clerical headache. Side note—if you haven’t read Ideas are Free there are many examples like this one, small ideas can be just as beneficial as sweeping innovation efforts.

Idea: W.L Gore (who most people know from Gore-Tex fabric) gives employees “dabble time” or 10% of their work day to develop new ideas and work on personal projects. One employee, Dave Myers, identified that one of their products, ePTFE a coating for push-pull cables, could be used for comfortable to use guitar strings.

Benefit: The coated strings proved to only be marginally more comfortable but they kept their tone longer than conventional guitar strings. After W.L. Gore launched them under the brand name ELIXIR Strings, they are now the No. 1 selling acoustic guitar string.

Idea: Just like W.L .Gore, Google allows time for personal projects. Some of Google’s best projects come out of their 20 percent time policy. One of these is something you probably use multiple times a day, Gmail.

Benefit: Paul Buchheit, the creator of Gmail, started on the project in 2001 and worked up to its launch on April 1, 2004 (April Fools but not really.) Gmail became the first email with a successful search feature and the option to keep all of your email (hello 1GB of storage) instead of frantically deleting to stay under your limit. The initial launch was by invite only, quite the hot commodity. Now, it’s considered a faux pas not to have an email address ending in @gmail.com.

Idea: Every year, Shutterstock hosts an annual hack-a-thon over the span of 24-hours (plus 4 hours of demo presentations at the end.)These challenges are designed to allow employees to pursue any ideas they have for the betterment of the company. Why should you host a hack-a-thon? They encourage collaboration, creativity, and innovation—some of the best qualities of engaged employees.

Benefit: Awesome ideas come out of these hack-a-thons, they save money, increase revenue and improve processes. To name a few projects that were born at hack-a-thons: Spectrum—an awesome user experience tool that allows you to search through Shutterstock only using color. Oculus—a data analysis tool that came out of the 2012 hack-a-thon and is now used at Shutterstock every day.

Idea: Sometimes, intrapreneurship happens by accident. Dr. Spencer Silver, a scientist at 3M, was attempting to create an extremely strong adhesive to use in aerospace technology. Instead, he accidentally created a light adhesive that stuck to surfaces well but didn’t leave a nasty residue.

Benefit: Instead of throwing away this idea because it didn’t solve the problem at hand, he stuck with it until he found a use for it. After many years of persistence and spreading the word it finally clicked with someone else, Art Fry—another 3M scientist. He thought back to one of Silvers seminars and they began to develop a product together. Post-It notes were born and if you are the vast majority of desk workers you’re probably looking at a pad of them right now.

Idea: Patrick Naughton, a developer, almost left Sun in 1995 because he believed they were missing out on the fast-growing PC consumer market. He was convinced to stay and help Sun set up a group dedicated to the consumer market. This is where group member, James Gosling, created an elegant object-oriented programming language called Oak, which was later renamed Java.

Benefit: This was initially created to help set up Time Warner cable boxes. When that deal fell through, Bill Joy, co-founder of Sun, recognized the value of Java and that it could be implemented across all different platforms. As you know, Sun has since merged into Oracle and Java now runs the world with 930 million Java Runtime Environment downloads each year and 3 billion mobile phones run on Java.

Idea: Ken Kutaragi, a relatively junior Sony Employee, spent hours tinkering with his daughters Nintendo to make it more powerful and user friendly. What came from his work is one of the most recognizable brands in the world today, The Sony Playstation.

Benefit: Many Sony bosses were outraged at his work, thinking that gaming is a complete waste of time. Luckily someone in a senior position saw the value in the product and thankfully so, because now Sony is one of the world leaders in the prosperous gaming industry. This shows that company leaders should always be open to innovation—no matter how farfetched and pointless it may seem.

Idea: Originally called the “awesome button,” the Facebook Like button was first prototyped in one of Facebook’s infamous hack-a-thons.

Benefit: Facebook has never released statistics based on the like rate and certain time frames. But to all of us in the computer using world it is pretty evident how the invention of the like button affects us on a daily basis. Companies like Facebook, who are constantly innovating and changing, are some of the most successful out there.

As you can see, great ideas and products and came result from letting your employees think, experiment, and play. How you do this is different for every company. An official “20% time” rule works at some organizations, while hack-a-thons are a better idea for others. What’s important is that you embrace the overall goal of engaging employees, and choose a system for applying that vision that fits with your company culture.